In this article, Brian Herd states that despite growing concern from the community and action groups about elder abuse, action from law makers has been slow.

Our politicians are Claytons like – the lawmakers you have when you don’t have lawmakers.

They are very good at appearing to do something when they’re really not – they are always first past the post in the rhetoric stakes but bring up the rear in the action stakes.

A more subtle variation has developed as well – actually passing reforming laws but delaying their commencement – sometimes for a very long time. Bit like the tortoise and the hare really – race through the law impressing the constituents but then wait forever to have the law actually come into force while the ‘system’ and the bureaucrats try to play catch up.

Generally, however, if you raise an important issue for much needed reform, it will be shuffled off to the avoidance factories – an inter-departmental committee, a law reform commission, a panel of experts, a working group, a parliamentary committee, a task force or a ‘take your time’ request for a ministerial briefing.

Fortunately, when the stakes are high involving usually social evils and threats to the vulnerable, they are prone to act remarkably expeditiously – it’s their mantra – ‘we’re listening to the people and we hear what you say!’  Take the recent changes to law in relation to paedophilia and social media bullying and harassment.

But, at other end of the lexicon of social evil, the elderly, it seems they adopt the same pace as their ageing constituents – slow. We are awash with plans, working groups and other beneficent movers and shakers on tackling elder abuse – we have lots of aspiration but little action.

They’re not waiting in the US State of Illinois.

Just this month it was reported that the State legislature had passed a law providing that if a person is convicted of financial exploitation, abuse or neglect of an elderly person, the convicted person will lose any benefit or entitlements under the elderly person’s Will. Ouch. I’d call that going for the inheritance jugular.

In Australia, we already have what is known as the law of forfeiture – if you are responsible for the death of someone you will lose your inheritance from that person. Now, Illinois has extended that punishment to encompass a person’s conduct that does not amount to murder, but simply, abuse.

For me it is an attractive disincentive to an abuser – let me know your thoughts. 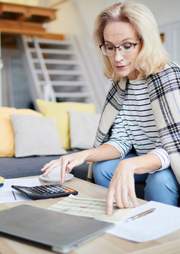