This is a community-based pilot study on the financial management practices and plans of older urban non-English speaking, and rural English speaking, Victorians. The three language groups assessed were Greek, Italian and Vietnamese. There are substantial communities of older Greek and Italians in the Eastern Health region which is the focus of the study, and Vietnamese were chosen as an Asian culture with an emerging elderly population.

An English speaking rural group was included because the rural population is ageing at a faster rate than the urban population, and issues of living on the family farm, distance and reduced services affect rural populations in ways that are important for safe management of money. 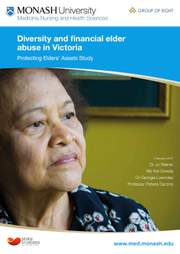