Embracing the Future – Tasmania’s Ageing Profile Part I is the first publication in a series of reports that provide current data about older Tasmanians. These reports will improve understanding of Tasmania's ageing population and the opportunities and challenges that come with this demographic shift. This series will inform policy and initiatives across the State and aid government to identify priority areas for services, programs, education and development that supports Tasmanians as they age, now and in the future. Embracing the Future – Tasmania’s Ageing Profile Part I presents data about what Tasmania’s ageing population looks like, where ageing is occurring and what it will look like in the future. In essence, this report reveals the ‘what’ and ‘where’ of ageing in Tasmania

Tasmania should embrace its ageing population, but also needs to plan for it. As the proportion of Tasmanians aged over 65 year’s increases, the proportion of people of ‘working age’ (15 to 64 years old) is decreasing. This has implications and presents challenges for Tasmania’s social and economic prosperity, but population ageing also presents many opportunities. 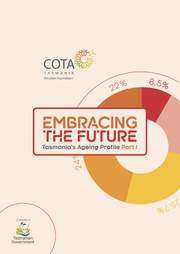