It Could Be You: Female, Single, Older and Homeless

This report documents a collaborative project which sought to interrogate the experience of older women and the reflection of that experience in policy. The project sought an inclusive homelessness definition, and to build a more robust knowledge base through which to inform policy and service delivery to this group.

The study was prompted by evidence of increasing numbers of older women entering for the first time the homeless population, and the concern of the homeless service system that demand could not be met. To put the experience of these older women into context the study examined the evidence of the combined impact of housing trends affected by changing demographics, the impact of ageing, and entrenched financial disadvantage on women. Combined with the qualitative evidence from the thirty one homeless older women, the study concluded that being female, older, and single is to be at housing risk.

Most of the women interviewed for this study did not fit the profile of older homeless people: most had worked throughout their lives, raised children, and endured abusive and difficult relationships. As women living alone in their fifties and sixties, however, they became susceptible to a health crisis, sometimes work related, or age discrimination at work, resulting in difficulties keeping or finding employment. The crisis of losing work, combined with the failure or refusal of their family to support them, put these women at housing risk.

The study argues for a gendered analysis of housing, homelessness and ageing policy if we are to adequately understand and respond to the different experiences of women and men. The study recommends more inclusive definitions and tools for counting housing risk and homelessness that balance a problem of the hidden nature of many older women’s homelessness with the evidence of housing risk provided in the social and economic research.

The study contains recommendations on the need for an increase in appropriate and affordable single person housing stock for older women, and for innovative solutions such as a program promoting secondary dwellings to create new rental opportunities in three bedroom homes with one occupant.

The study cautions that housing risk is fundamentally an issue of poverty, and that the emerging levels of housing risk for older women cannot be reduced without a combined effort by governments, industry and community to address the poverty of older women that has accumulated over a lifetime. 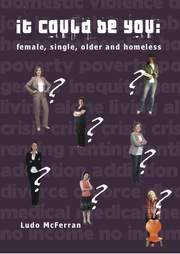