All governments in Australia have agreed to develop a national plan that recognises the emerging and growing problem of abuse of older Australians. While all governments are committed to responding to the abuse of older people, we still don’t fully understand the nature and extent of the problem, or the best way to respond in all circumstances. We need to pay attention to the particular needs of older Aboriginal and Torres Strait Islander People, and older people from culturally and linguistically diverse (CALD) backgrounds.

As governments, we need to actively plan the best way to respond to an issue that will continue to grow with our ageing population. Where possible, we should do this in a nationally consistent way, based on evidence.

In its 2017 report Elder Abuse—A National Legal Response, the Australian Law Reform Commission (ALRC) recommended that all governments in Australia work together to develop a national plan to combat abuse of older people. This would include establishing a national policy framework, outlining strategies and actions by government and the community, setting priorities for implementing agreed actions, and conducting further research and evaluation. 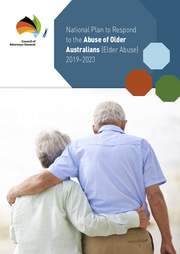