This report outlines the findings of an elder abuse research project that aimed to:

The ABS datasets examined in this report are the: 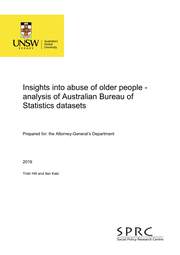