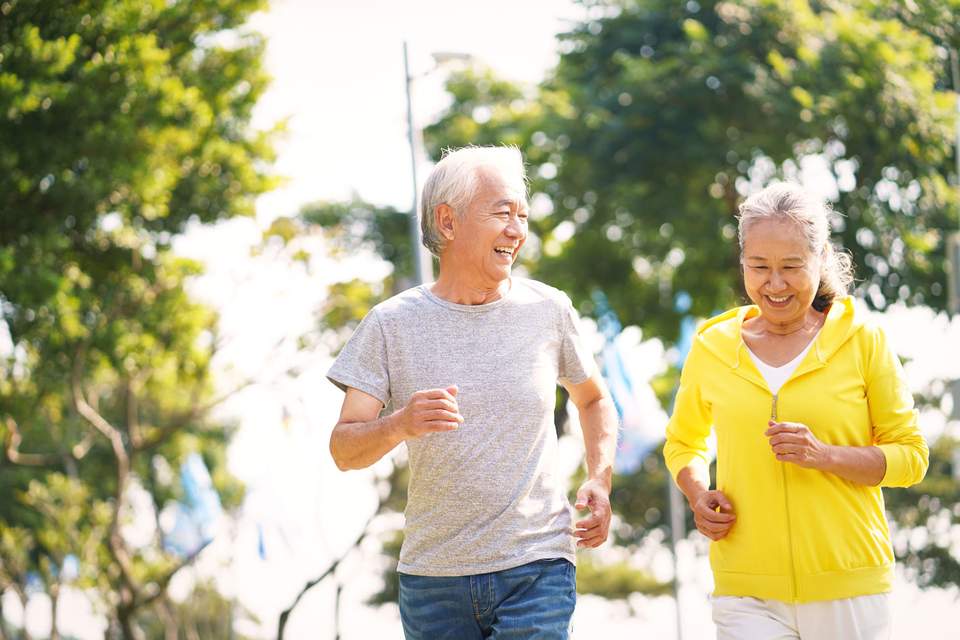 Better bones, stronger muscles and a happier heart — the benefits of exercising into old age are big

Ageing. It's something many Australians dread.

Things that used to be easy may not be anymore, appearances change and the body functions differently – but it's not all bad.

The ageing process can't be stopped, but physical activity can bring a host of benefits as people get older.

According to Pazit Levinger, principal researcher at the National Ageing Research Institute, overall wellbeing and health are better for those who exercise into old age.

Physical activity is one way you can preserve efficient systems in the body that help you overcome diseases, function better and live a good quality of life,

'Running has kept me healthy'

While not all older Australians can expect instant health improvements from exercise, 84-year-old Abdon Ulloa swears by his regular running routine.

Abdon took up the hobby in his mid-40s. He's now done 75 marathons (his last one was at 77 years old) and he estimates his half-marathons are now into the thousands.

He goes to parkrun weekly. He's been turning up on Saturday mornings for the last three years and has clocked up 184 runs.

All that exercise, he believes, has paid off.

To keep running, to keep moving, has very much kept me healthy,

"I don't take any medicines and I visit the doctor once a year. I have no problems at all."

Abdon is in a league of his own at his local parkrun in Menai in Sydney, where he's the only runner over 80.

About an hour south, 82-year-old Ron Perry can be found making his way around the North Wollongong track.

A lot of us still shuffle along up the back of the field,

Like Abdon, Ron took up running in his 40s and believes it's kept him in good health.

"I started running around the block and then along the beach and just took it on from there," he said.

In the nine years since starting parkrun, he's done 215 runs.

The World Health Organisation (WHO) and Australian Department of Health and Aged Care recommend people aged 65 and older do about 30 minutes of exercise most days of the week. But data from the Australian Bureau of Statistics (ABS) shows half of this cohort isn't that active.

"It's one of those things, we know it's working [exercise], we just need to encourage people to do it more," Professor Levinger said.

She also explained that ideally, exercise in older age should target the heart and lungs, with a bit of strength and resistance training too.

There should also be a focus on balance exercises.

"The heart has less capacity to function efficiently like it used to when we were younger," Professor Levinger said.

"And the same with the respiratory system. We often might feel a bit breathless when we get older."

Then there's the issue of muscles getting weaker.

"If we don't use them and preserve the strength we have, we lose muscle mass and strength and that will have a direct impact on how we function," Professor Levinger said.

When you exercise, you can improve how those systems function.

When it comes to running in particular, Professor Levinger said the benefits were large, particularly for the cardiorespiratory system and bones.

"Your blood pressure is in the healthy/normal range, your resting heart rate is reduced and pretty much your heart works more efficiently," Professor Levinger said.

We often use the phrase 'use it or lose it', which is actually correct.

Someone using it is 98-year-old Colin Thorne, who in New Zealand has become the oldest person to join the 100-club at parkrun.

I'm not going to give up until I have to,

It's never too late

Bill Lamont is Australia's oldest active parkrunner. He signed up a couple of months ago and broke the record for his age group at Jells parkrun, on his first walk around the track.

"In June, on my 93rd birthday, I decided to give it a try and I'm very pleased that I did so, I'm thoroughly enjoying it," Bill said.

Bill has always been active, and even now he does exercise classes, orienteering walks and plays table tennis.

"All those activities, I’m quite sure, are what is keeping me as healthy as I am. I don't have any medical problems at this age," Bill said.

Professor Levinger says the bottom line is, do what you can manage, and do what you enjoy.

Do whatever you can and build up. You don't have to be fit, you can exercise and start at any age.

Just like Lenore Rutley, who's always done her morning walk, but took up running at 72.

"I wanted to do something a little different," she said.

Since that decision was made, Lenore has amassed 332 parkruns.

Professor Levinger said the key thing was that people aim to do something they enjoy.

"You want to do things that you feel comfortable with and find fun, because then you are likely to stick with it," she said.

And as Lenore puts it – "what else would you do on a Saturday morning?"