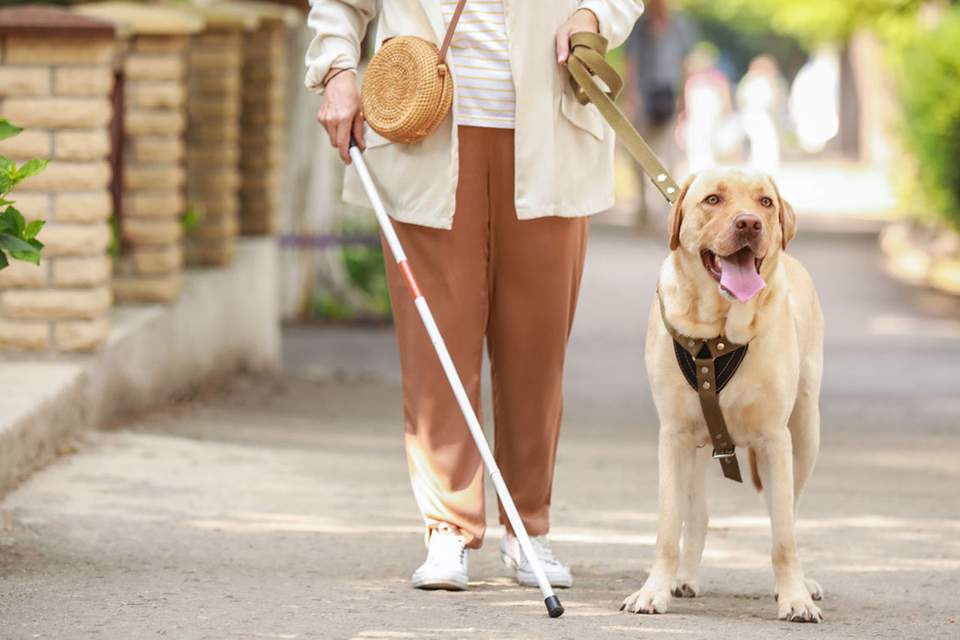 Last week, the ABC's 7.30 program revealed Catherine Rosa — who is legally blind and can barely see because of a degenerative eye disease — was experiencing severe distress over the lengthy dispute.

Ms Rosa lives alone with her guide dog and feels unsafe because she's had repeated falls.

Requests to modify her home, based on assessments by allied health professionals, had been rejected by the agency, which had argued they were not value for money and may not substantially reduce the risk of injury.

"It's just been completely demoralising and demeaning and it's just brought me to my knees."

After her story was broadcast, Ms Rosa received a call from the responsible federal minister, Bill Shorten.

"[Mr Shorten] said that he was really sorry," she said.

He was really angry and he just wanted to fix everything up.

"To be actually recognised was a wonderful thing."

The Minister's intervention means significant home modifications, including to her bathroom, will now be covered, overturning the refusals.

This sudden change is also a relief for retired nurse Cate Warren, who volunteers at the Cygnet Community Hub and has spent her spare time over several years supporting Ms Rosa.

Before the Minister's intervention, Ms Warren claims trying to get the necessary NDIS supports was impossible, but now there's been a dramatic shift.

"You couldn't seem to get anywhere before, and now I don't know how many calls I've taken and each time it's different people offering the support, and so I find that really encouraging," she said.

"The money has actually been put across into her NDIS account for the bathroom to be redone and they are then looking at what are the things that she needs and they will also be put into a new plan.

"She will get her intercom system at her front door, she'll be able to have some of those apps on her phone and some assistive technology in the home."

Ms Warren said the focus of her support for Catherine would now shift to trying to keep her as safe as possible while she waits for a builder to make the home modifications that are needed.

"She's still living in the house that's got no assistive technology in it, nothing like that," she said.

"We're still at that point of a danger for her."

There are a growing number of people who are concerned about their funding plans, with more than 4,400 NDIS legal appeals before the Administrative Appeals Tribunal (AAT).

The AAT's annual report for 2020-21 stated there had been a substantial jump in applications related to funding disputes for supports, with applications increasing by 76 per cent.

Ms Rosa is frustrated because she says it took speaking out in the media for her dispute to be resolved.

She argues that proposed changes by Mr Shorten to how disputes are handled cannot come soon enough for other NDIS participants.

"It's really unfair that, because I got on TV, I get things in my plan recognised," she said.

What about the thousands of people [who] are justified in what they're saying and their plan has just been knocked back?

"I do believe that Mr Shorten is trying to change everything, but I think that's going to be a huge operation."

Ms Rosa says one of the most-important changes that can be made to the scheme is increasing the number of people with a disability who are in decision-making roles.

In a statement, Mr Shorten said he had phoned Ms Rosa after seeing her story on ABC's 7.30.

I called Catherine because I wanted to acknowledge that her NDIS experience is the complete opposite of what Labor had envisaged for the NDIS," Mr Shorten said.

"The NDIS was meant to give participants choice and control. It was not meant to be a second job just so they can have the supports they deserve."

The NDIA said it was continuing to support Ms Rosa to receive the disability-related supports she needs.

Ms Rosa wants to give back to the small Tasmanian community that has supported her.

Once she receives assistive technology, she plans to study to become a counsellor and help others at the Cygnet Community Hub.

Ms Warren says Ms Rosa has a lot to offer the hub.

"We have people who drop in all the time, a lot with mental health problems and just people who in their everyday life have hard times," she said.

"She certainly has the lived experience and she is very good with people."