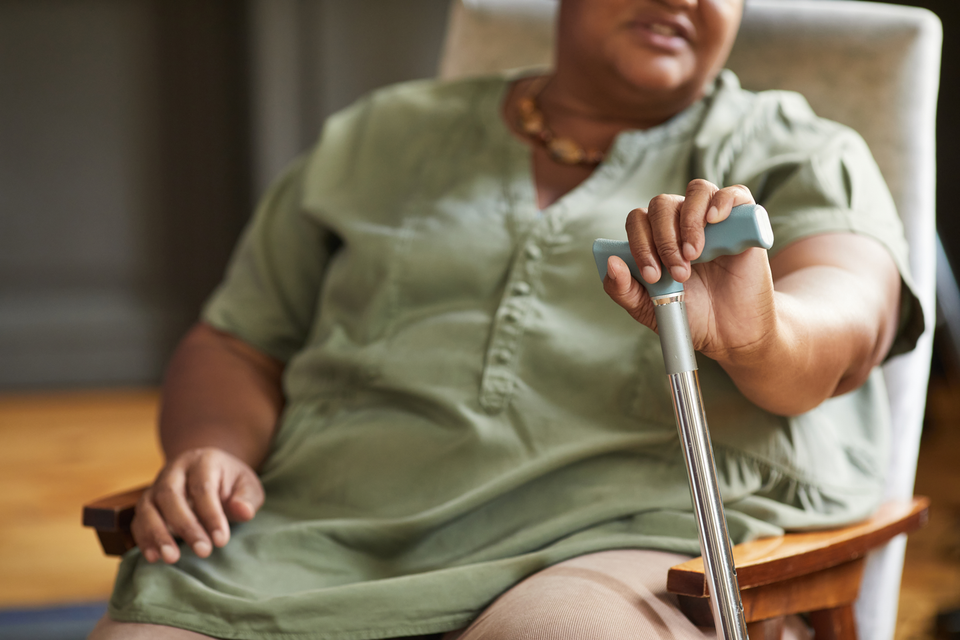 Sue Gage has to be careful when she puts on Brendon Goddard's cardigan.

"I can't go near his armpits. He's ticklish," she says.

So she gently pulls the blue cardigan over his shoulder and rolls the arms down over a brace that keeps Brendon's left hand secure.

Next she takes his feet out of the wheelchair footplate and curls his socks over each one, followed by his loafers.

Brendon suffered a stroke almost two years ago, and since then, a carer like Sue has arrived each morning to help the 67-year-old get out of bed, shower and dress. They arrange his pills in a little plastic cup, make the bed and leave.

It all takes less than an hour and is provided under Brendon's federally funded home care package.

But from July 1, Brendon and his wife Monica may need to fork out an extra $40,000 a year so Brendon can receive the same care, due to changes made for aged care workers by the Fair Work Commission.

It is a change that will affect more than 200,000 elderly Australians who receive home care packages.

Earlier this year, the commission reviewed the Social, Community, Home Care and Disability Services industry award in response to ongoing concerns about the working conditions of home care workers.

It set new standards, including two-hour minimum shifts, travel costs between jobs covered, and a fee for "broken" shifts.

But those changes, plus the recent federal government decision to raise the minimum wage, means someone, somewhere along the line, has to pick up the cost.

Giovanni Siano is the owner of home care package provider Home Instead in Geelong, south-west of Melbourne.

He said the changes are the boost needed to help the industry hire and retain staff, but he is one of many providers warning that without a boost to the home care budget by the government — also due on July 1 — the extra staff costs will have to be passed onto his clients.

And those who cannot afford it may have to move to an aged care home.

It wasn't necessarily considered — the implications that those extra costs on providers would have on clients," Mr Siano said.

This year, the Reserve Bank predicts inflation could hit 7 per cent.

Mr Siano estimates the home care budget will need to rise by 20 per cent for clients to receive the same care they do now without having to pay higher fees.

"We have about 200 home care packages that we're currently going through, but we are technically driving blind because we don't know what the subsidy is going to be like, so we are potentially undercutting the care for our clients," he said.

"Providers such as myself have no choice but to pass on the extra cost to the consumer to remain viable."

Craig Gear is the chief executive of the Older Persons Advocacy Network and said his staff are fielding calls every day from the elderly and their families, scared about what will happen from next month.

But he wants to reassure those on home care packages that no changes can be made to their services without their consent and it is up to the provider to ensure people are treated fairly.

"The delivery of the two-hour block does not have to be with the same client and it doesn't have to be in the same location, so it's on the providers to find a solution that works best," Mr Gear said.

"It is a good thing that people are being given consistency of hours and support, but it also needs to be adequately funded."

A spokesperson for Aged Care Minister Anika Wells said home care package funding will be indexed from July to provide ongoing, additional funding to recipients, and that the Department of Health is working with providers to manage the changes.

The spokesperson did not answer questions about how much funding would rise by, or if the Fair Work Commission's rulings will be considered in the budget.

What about people who can't afford it?

Brendon Goddard said he does not need someone for two hours every morning and night, but he may have to pay for it anyway.

"I will pay the extra money, we'll find it some way, but what about people who can't afford it? What, are you going to just lay in bed all day?" he said.

Brendon's wife, Monica, is grateful the couple can afford the rising costs in care.

He likes having his carers, he likes the assurity that they know what they're doing," Monica said.

"I prefer them to do it because I know they can manage him."

Sue Gage said some of her clients are terrified they will miss out on vital services.

"It's going to make a lot of difference to a lot of people," she said.

"I have one lady that I go to — she's a dear lady — and she has me for two hours a week to shower her and there's no way her package will cover a two-hour shift twice a week. So I don't know what will happen to her.

"I can see what the government are doing, they want us to have a pay rise and they want us to feel like we're valued, but unfortunately there's a lot of vulnerable people out there who are going to be affected."