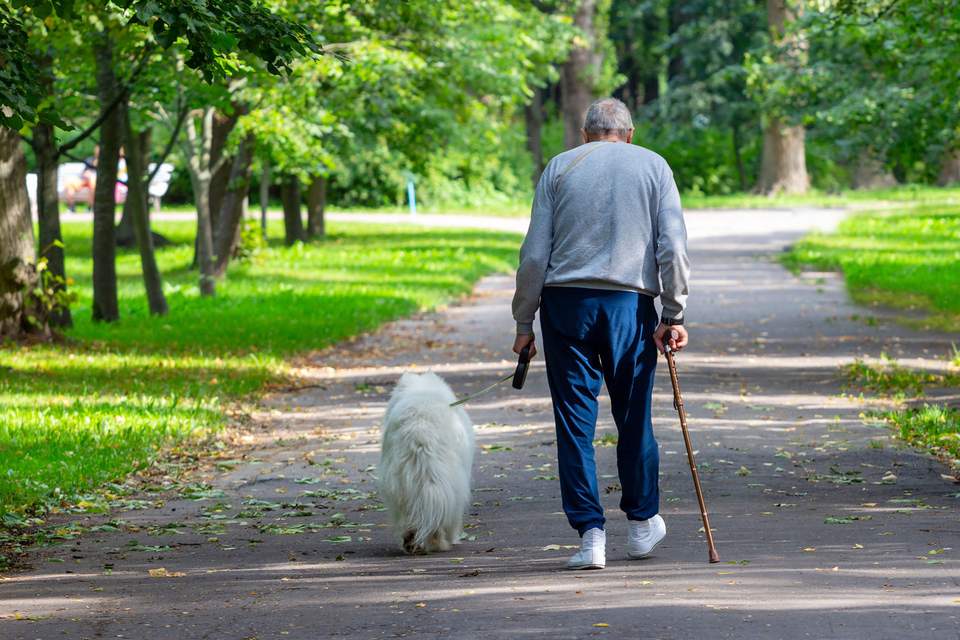 In less than a month, pensioner George Parkyn and his beloved dog, Baxter, could be homeless.

It is a fate that the 66-year-old dreads.

"You may as well be dead," Mr Parkyn says through tears, his dog comforting him at his feet.

"If we've got nowhere to go, what is there in life?"

In April Mr Parkyn's rent will go up by $88 a week, meaning he will have to spend 52 per cent of his disability pension on keeping a roof over his head.

"I just won't be able to afford to live here," he said.

"Some nights, I just sit here and cry … not just for myself but for the others."

Mr Parkyn lives in one of more than 8,000 Queensland properties provided through the National Rental Affordability Scheme (NRAS).

NRAS started in 2008 with the aim of increasing the supply of new and affordable rental dwellings by providing an annual financial incentive to property owners for up to 10 years.

This incentive is issued to landlords to create lower-cost rentals for low and middle-income earners at 20 per cent below the market rate.

Every year rentals on the scheme increase in line with the Consumer Price Index, but in years five and eight of the scheme, property owners are given the opportunity to increase their rent by market value.

For Mr Parkyn and others living in Tannum Sands estate, it is year number eight.

"A lot of the … NRAS renters are single mums," he said.

"There's single women that have [domestic violence orders] out against their partners … they're suffering depression."

Mr Parkyn said with a five-year waitlist for public housing there was nowhere for him and his neighbours to go.

He said both sides of government had said they were investing in social housing and homelessness, but they were long-term projects.

"That's not going to fix me in April when I'm homeless with Baxter in my little Suzuki," he said.

Over the next four years those living in the 22,000 NRAS properties will find themselves competing for rentals in the open market when the scheme ends.

"People will be thrown to the mercy of the private rental market, and rents have increased massively," Ms Colvin said.

"It's just not possible for someone on a low income to find a rental they can afford, so what we'll see is more and more people become homeless."

Ms Colvin said there was also a shortfall of more than 433,000 social housing properties around the country.

"Each state might have a waitlist of 50,000 households, so often people have to wait 10 years," she said.

"If you're ending up in the private rental market paying 60 to 70 per cent of your income in rent … it's just an impossible situation for people."

One step forward, two steps back

The Queensland government is investing $2.9 billion in social housing between 2021 and 2025.

In a statement, a spokesperson from the Department of Communities, Housing and Digital Economy said this was the largest concentrated investment in social housing in Queensland's history and would lead to 10,000 homes being supplied.

"The Queensland government is focused on increasing housing supply and helping tenants to maintain their tenancies in the private market," the spokesperson said.

"However, it is now forced to do the heavy lifting following the Commonwealth government's withdrawal from the National Rental Affordability Scheme.

"The Commonwealth government's withdrawal from NRAS will have a serious impact on the housing sector in Queensland and place further pressure on housing affordability and availability in the state."

Ms Colvin said the work the Queensland government was doing was being negated by the federal government's ending of NRAS.

"It's one step forward by the Queensland government and being pushed two steps backwards by the federal government," she said.

"I don't think the federal government is really hearing how devastating this is for regional communities."

A spokesperson for the federal Department of Social Services said states and territories were primarily responsible for social housing and homelessness.

He said in 2021-22 the Australian government expected to spend about $9.3b to improve housing and homelessness outcomes.

This included $5.3b in Commonwealth Rent Assistance to help eligible Australians pay their rent and $1.6b to the states and territories through the National Housing and Homelessness Agreement.

The spokesperson said no new NRAS allocations were being provided and that the 10-year time frame was an original design feature of the scheme.

Mr Parkyn said he had written to 32 politicians asking for help, but he had lost faith in the government and was losing hope of finding a way forward.

He said he had considered taking his own life and worried about the mental health of others facing homelessness.

"How many people are going to commit suicide?" Mr Parkyn said.

"I know with my mental health, I've thought of it.

"That's what the government want us to do — they want us to curl up and die and just go away because we're a burden on their budget.

"We need a commitment from either government, something that's going to give us hope, give us life and, hopefully, we can stay where we are."