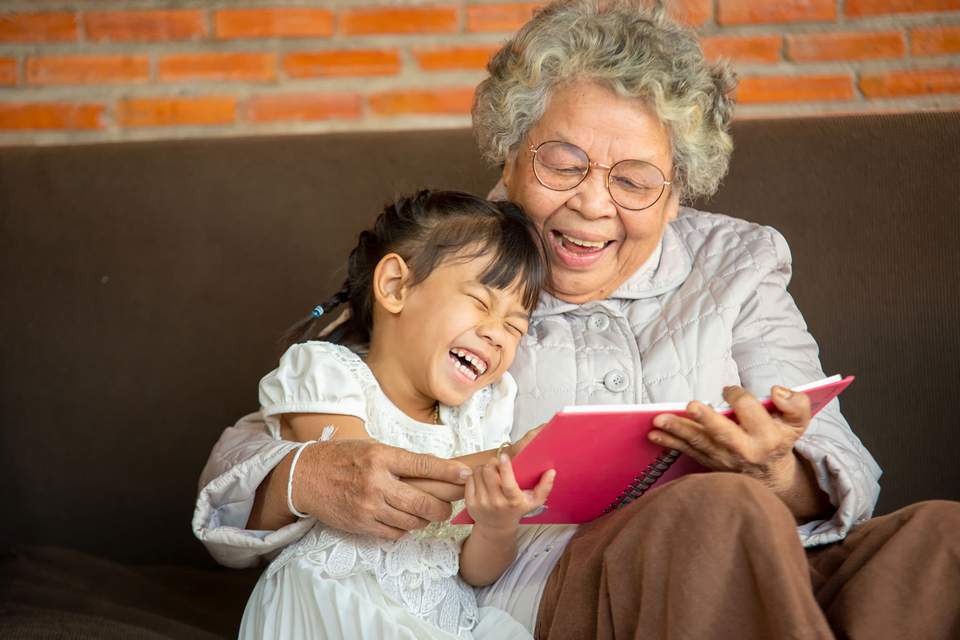 Grandmother hypothesis revisited: the women who fill our children’s most human needs

We probably don’t, as a species, spend enough time looking at the brains of grandmothers. Rather than being recognised as the matriarchs and cornerstones of family units, as they are in some cultures, nannas are too often derided as cheek-pinching, bosom-heaving, lavender-smelling, force-feeding doddery old bats who while away the hours knitting in armchairs while sporting large, comfortable underpants (not that there’s anything wrong with that).

But scientists have now established, the support – and good health – of grandmothers are crucial to the long lives, and health, of their kids, and grandkids.

For a new study recently published in Proceedings of the Royal Society B, American researchers from Georgia’s Emory University scanned the skulls of 50 grandmothers with an MRI machine as they looked at photos of their grandchildren, aged between three and 12. They were also shown photos of a child and adult they did not know, and photos of one of their own, grown children – an adult parent of the same sex as their grandchild.

As the images of the grandkids flicked past, the parts of the brain to do with emotional empathy – as well as those to do with movement and motor simulation – flared and crackled. Neuroscientist James Rilling said: “When they’re viewing these pictures of their grandchild, they’re really feeling what the grandchild is feeling. So when the child is expressing joy, they’re feeling that joy. When the children are expressing distress, they’re feeling that distress.” Pure empathy.

(This reminds me of the findings of the child psychiatrist Arthur Kornhaber in the 1980s on the significance of grandpaternal relationships, prompted by a young patient called Billy whose behavioural issues quietened when his grandmother was present. When Kornhaber asked Billy to draw his family, Billy created a pyramid-shape, with him on the top of it playing football. His parents were placed under him, “happy because I am a good football player”. At the bottom were his grandparents, “happy that I am happy”.)

When shown images of their adult children, the grandmothers activated a different part of their brains – cognitive empathy, which means they were trying to understand them on a level more cerebral than emotional. The headlines read: “Grandmother’s Brain in Sync with Her Grandkids!” and “Grannies are good for you!” as the researchers outlined the benefits of grandmaternal care.

But for decades, scientists were perplexed by what is the actual point of a post-menopausal woman. And, yes, we could riff on this idea for some time, but they mean here in an evolutionary sense – given that species like apes die soon after losing reproductive function. Then anthropologists studying hunter-gatherers in Tanzania in the 1980s discovered that when grandmothers helped their daughters forage and care for their babies, they could have more kids and live longer. This was called “the grandmother hypothesis”, and its relevance remains today.