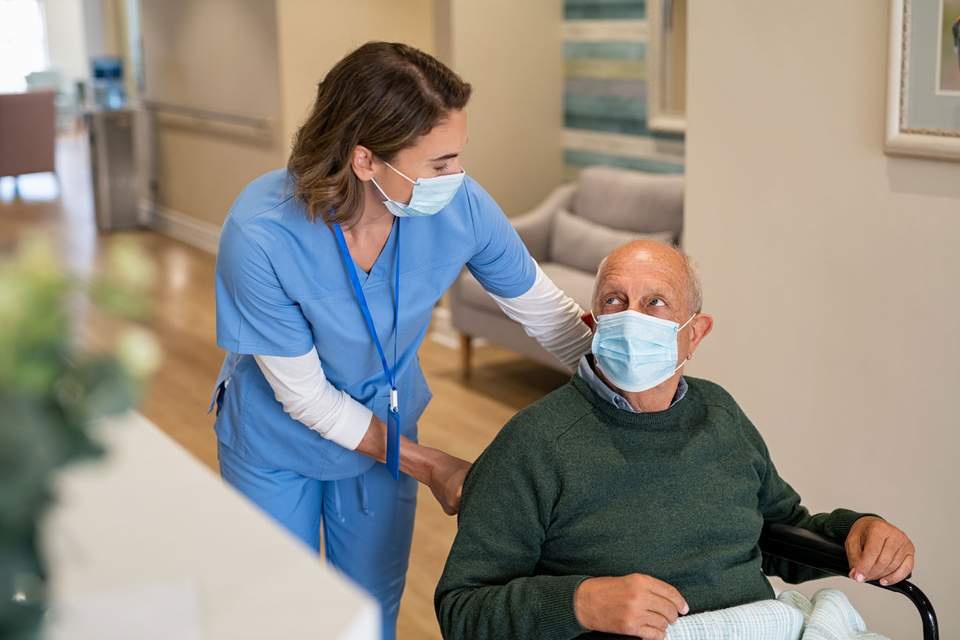 Aged care providers are "very concerned" rising COVID-19 outbreaks in the sector could be similar or worse than outbreaks seen earlier in the pandemic.

Queensland has the second most of any state, with 219 outbreaks, totalling 5,192 cases amongst residents and staff during the current outbreaks.

New South Wales has the most outbreaks, with 322.

"We are concerned that we'll see a level of impact similar to, or possibly even greater than that we had with the first Omicron waves back in December-January, so we are concerned about the next few weeks.

"But we are also at the same time better prepared in terms of personal protective equipment, rapid antigen test availability, and also the antivirals."

"We're hearing that somewhere between 10 to 15 per cent of staff are currently unavailable due to catching the disease or being close contacts — that's a pretty regular number," Mr Sadler said.

"We are concerned that as the uptick in BA.4 and BA.5 subvariants of Omicron happens over the next few weeks, we will see a return to the levels of absence that we had back in January in the first wave of Omicron, which was up as high as 30 per cent of staff unavailable."

On Sunday, Queensland Acting Chief Health Officer Peter Aitken said of all COVID-realated deaths in the past five weeks, over 97 per cent were people aged 65 years and older, with two thirds of those not up-to-date with their booster shots.

ADF called to help with 'physical and emotional burden'

ACPA is calling on the government to extend the availability of ADF support for the sector, past the August 12 end date.

Mr Sadler said there are currently 24 ADF personnel working in aged care, but expects the numbers to soon rise.

They are also calling for the federal government to reinstate "prevention funding" for facilities to buy PPE, RATs and other essentials prior to outbreaks.

"At the moment, aged care services can only get the costs of prevention reimbursed when they actually have an outbreak and that seems to be a pretty perverse incentive to us."

Unions have echoed the ACPA's call for further ADF support.

"We're certainly urging the government to be going out and kind of trying to help organise that," she said,

"We're also urging providers — don't be proud, pick up the phone, say, 'We need the ADF in our facility'.

"Because if we're understaffed, now staff are pushed to the edge and older Australians suffer."

"I think aged care workers across Queensland are just feeling this sense of dread," she said.

"They are already exhausted — they started COVID understaffed — they've been working hard for the last couple of years. They've seen numerous waves of COVID come through, and I think they're just feeling sick about it, because what they know is they are going to be absolutely exhausted, working long, sometimes double shifts in full PPE.

"It's the physical burden, but it's the emotional burden of going home every day and feeling like you let your residents down."

She said the government must incentivise people to join the aged care work force.

When asked about the COVID situation in aged care, Queensland Deputy Premier Steven Miles said the decision-making falls to the federal government.

"We'd encourage the Commonwealth to continue to work with the sector to make sure that people can be adequately looked after and staff can be furloughed when necessary," he said.

"I understand there is still defence support in aged care and if necessary, that could be ramped up."

Queensland recorded 5,804 cases of COVID-19 in the latest reporting period, bringing the number of active cases to 64,691.

No deaths are reported on weekends.

The number of hospitalisations fell slightly, with 1,042 beds occupied by people with the virus, 23 of which are in ICU.

Mr Miles said this was putting immense pressure on the hospital system.

"This is more beds then you would see at our biggest hospitals," he said.

"Taking one of our biggest hospitals out of the system and what impact that would have and that's what they're experiencing right now."

Mr Miles said the state's peak is still "weeks away" and hospitals were preparing for higher caseloads.

"There is surge planning for many different scenarios, including some that are much more severe than where we are at right now. But our hospitals will be doing everything that they can," he said.

"They will be rescheduling our plan to care where they can and where it's safe to do so."

Despite the mounting caseload, Mr Miles said there is still "no intention" for the state to implement a mask mandate.

"Even the modelling and what we're seeing is much lower than the same time period of previous waves," he said on Sunday.

"We're seeing the demand for hospital beds is much more than the demand for ICU beds. It hasn't risen with it, which is great news, it means it's a less severe disease."

He said there was no cause for concern about monkeypox in Queensland at this stage.