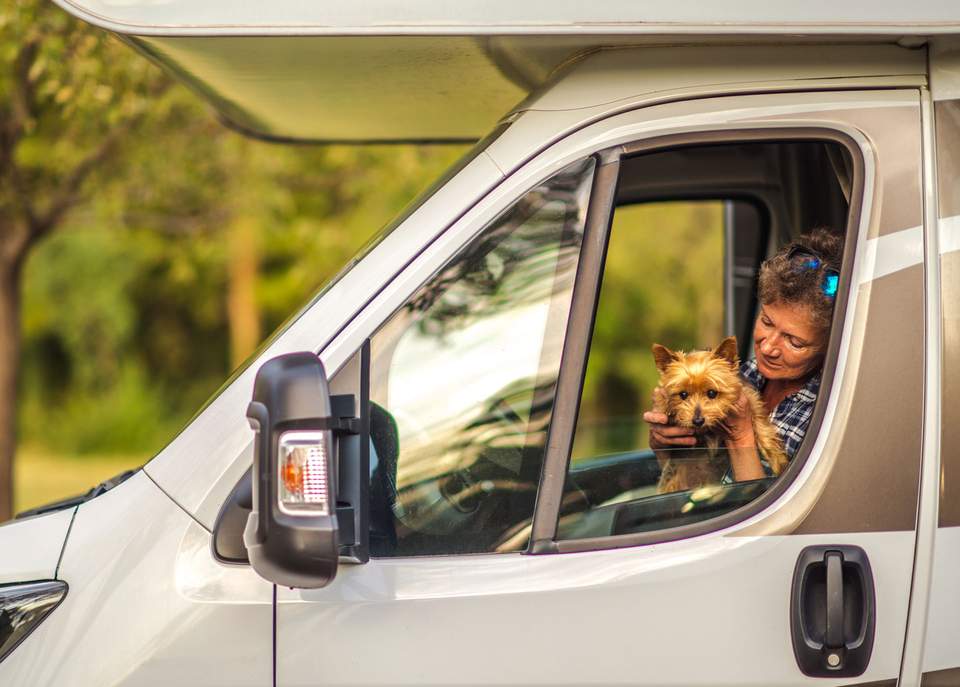 At nearly 80 years of age, Meg* realised she was "running out of money" and needed to take drastic action.

She was spending nearly 70 per cent of her aged pension on rent and her small nest egg was rapidly being eaten away.

With her lease nearly up and her rent looking set to rise from $390 per week to $500, Meg decided she would need to make a big life change.

"I worked [out] that if I continued the way that I did for another five years I'd have no money at all and that was the scary thing," she said.

Meg said her family had been helping her with the cost of her rent and then with her private health insurance payments.

"I've told them that I am refusing any more help at all," she said.

But finding a caravan in her $40,000 budget was difficult, with the market for second-hand vans extremely tight.

Eventually she managed to buy a caravan which sleeps four and has a toilet and shower.

I wanted it to be nice and something that made me feel alright about myself. I am not sad or stressed anymore.

Meg will set up the van on a friend's property in southern Tasmania. She is looking forward to the move.

Meg worked throughout her life until the age of 75, mostly as a nurse.

In recent years she sold a house in the Tasmania's north west, explaining she "couldn't maintain it financially".

It left her with some savings and she is on the wait list for social housing.

"They will put people on the wait list on the assumption that they will have used up their money by the time a place becomes available," she said.

She said there was "an awful lot of people like me and you don't hear from them because it's embarrassing and humiliating".

Initially I was very upset and distressed, I'd walk out of the room when the news came on about money or the housing crisis.

She said after seeking help from various support agencies, she realised she was not alone.

"I felt very foolish getting advice and very embarrassed but when I heard that my situation was not that at all uncommon, I felt better about it," Meg said.

"You know how you always feel guilty and it's your fault because you didn't live your life better or make better decisions and all this stuff?

I sort of relaxed a bit about all that, I wasn't beating myself around the head anymore.

She said while market forces which are driving rent prices up are difficult to control, she believes there needs to be more housing for older Australians who don't own their own homes.

Michael Fotheringham from the Australian Housing and Urban Research Institute said the private rental market is no place for people on an aged pension.

He said retirement policies are framed around the expectation property ownership.

"But for a growing number of Australians reaching retirement they still have an outstanding mortgage or they're still renting," Dr Fotheringham said.

"With interest rates and cost of living increases we're seeing rent rises all across the country.

For particularly older Australians who are on fixed incomes those rent increases are very, very hard to cope with.

Australia's vacancy rates fell to record low of 1.2 per cent over the June quarter according to CoreLogic, compared to 2.2 per cent for the same period last year.

The report said demand for rentals is only like to intensify as overseas migration increases.

Anglicare's Rental Affordability Snapshot 2022 surveyed 45,992 rental listings across the country, finding only 975 were affordable for a couple or single person on the age pension.

"We have an enormous shortfall in this country we need to be building hundreds of thousands more dwellings in that space," he said.

"The challenge we have though now is the supply chain for material goods needed to build housing is constrained and workforce issues as well.

It's going to be a long road to dig our way out of this.

He said a national plan on housing and homelessness is needed as well as a rethink of housing policy settings.

"Housing as an investment tool has outpaced the use of housing as shelter," Dr Fotheringham said.

"We need to recalibrate, we need to actually better balance the needs of tenants with those of landlords."

They have limited superannuation it just takes a life event, a divorce, or the death of a partner, domestic violence and we see these women are falling into homelessness.

Ms Healey is calling for an increase in Centrelink payments and joins a call for a national plan for housing and homelessness.

"Homelessness Australia are calling for 25,000 new social housing units to be built nationally," she said.

*Name has been changed.