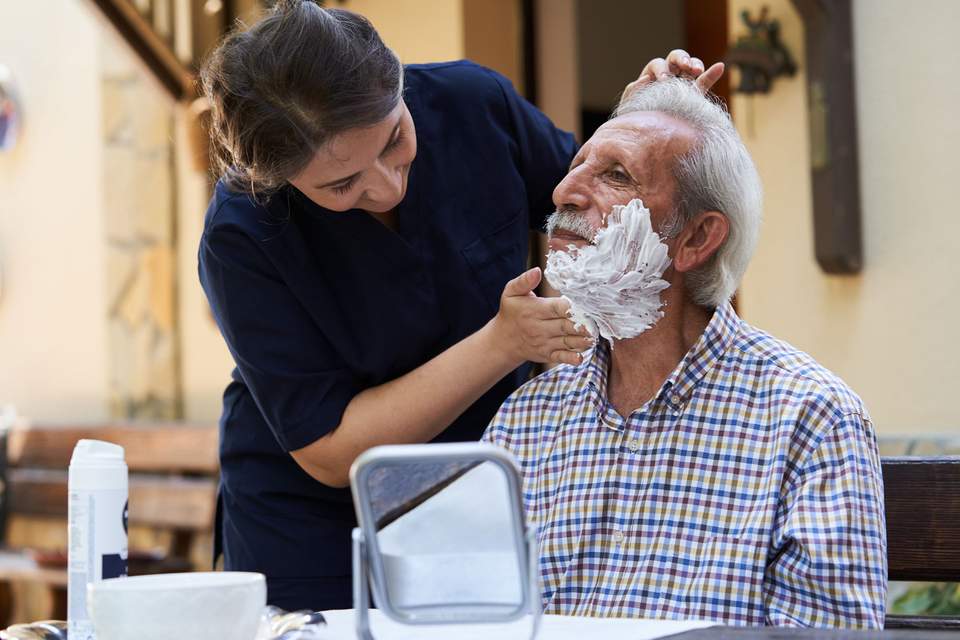 Angela Dolcetta has lived in the same home in Melbourne's north for more than 50 years, and she's determined to stay in her own home for as long as possible.

"I've got arthritis in my hands, my shoulders are not working anymore.

"But I just don't want to move from here. I love Reservoir and I wouldn't be happy to go somewhere else.

"And truly, I wouldn't like to go in a nursing home."

Ms Dolcetta has applied for a home care package to get help with shopping, gardening, and cleaning.

There are four levels of home care packages, with federal government subsidies ranging from $9,000 a year for basic help, to more than $52,000 for more complex assistance.

The money is paid to a provider chosen by the recipient.

Ms Dolcetta was assessed as eligible for a Level 2 package in October, but she's still waiting to hear when she'll be allocated a package.

"Once they assessed me I thought well this is good, I can call the people. But no, I was put on a waiting list."

After the Royal Commission into Aged Care, the federal government promised money in the budget to roll out 80,000 more home care packages over two years.

Almost 27,000 of those had been released by the end of February.

The waitlist has halved since 2019, but there are still more than 62,000 people waiting for a package at their approved level.

Craig Gear is the chief executive of the Older Persons Advocacy Network.

"Six to nine months is way too long for older people to wait for a home care package," he said.

"Older people are telling us that it's actually forcing them into residential aged care.

"And actually, some people are dying while they're waiting for the right level of care and the right package."

A Department of Health spokeswoman said 3,802 people died while waiting to be assigned a home care package in the second half of last year.

In a statement, a spokesman for the Minister for Aged Care Services, Richard Colbeck, said there was no evidence to suggest that deaths could be attributed to waiting for a home care package.

"Wait times for home care packages are at their lowest levels since Minister Colbeck was charged with the aged care portfolio in 2019," the statement said.

"Significant investments to boost home care package numbers have been made and strong progress to reduce wait time has been achieved."

Ms Dolcetta gets some fortnightly Commonwealth-funded cleaning, and she said she felt lucky that she had family to help while she waited for her package.

"A lot of people are struggling worse than me, and you feel sorry for people who don't have that family support, and they're waiting six or nine months as well," she said.

There are also concerns that there aren't enough staff to keep up with the new home care packages that are being rolled out.

Val Timms will turn 90 this year.

She lives in her own home in Mullumbimby in New South Wales, and receives the highest level home care package to help with personal care, taking her medication, cooking and cleaning.

"I get a lot of help; I wouldn't be able to manage without it," she said.

"People come and get me up in the morning, get me going.

"And then through the day, they make sure that I eat and drink."

Ms Timms is very happy with the care she receives from staff when they visit, but lately, her son Terry has been over to help more often.

Mr Timms said staff shortages meant his mum was frequently missing out on care because shifts were being cancelled.

"We find if someone goes on leave, it's difficult to replace them, or it might be with unfamiliar people," he said.

"If no-one comes, then basically Mum will stay in bed until one of the family pops around."

"But if I don't have them here, I can't do anything. I'm not able to do anything on my own anymore, unfortunately."

Terry Timms said his mother currently had $29,000 of unspent funds in her package.

"That's funding the government provides to support my mother that can't be spent because the provider hasn't got the staff to provide the services," he said.

"So that's an actual measurement of how far the service is falling behind."

Mr Timms said staff shortages also meant his mother was often seeing unfamiliar and new staff, which could be confusing for her.

In a statement, Val Timms's provider, Australian Unity, said workforce shortages were a nationwide problem, and it was experiencing challenges recruiting and retaining suitably skilled staff — a problem further exacerbated in regional and remote areas, including Mullumbimby, where thin markets and vast geography result in smaller pools of suitable workers.

"Workforce shortages restrict both our ability to sustain current service provision for our existing customers and inhibit our capacity to offer services to potential customers who may have just been approved for home care package funding," the statement said.

"While we have actively put in place a number of strategies … the Commonwealth Government is the key driver of the systemic changes needed to address the shortage factors."

Australian Unity would not comment on Ms Timms's specific circumstance, but said funds in a package could be unspent due to a number of reasons.

It said it routinely issued rosters so customers would know which staff would be visiting, but Mr Timms said that wasn't happening.

"I used to ring Mum in the morning and say, 'So-and-so's coming at nine o'clock,' and get her prepared. And that was a great support to Mum," he said.

"They might go days without the level of support that they need," he said.

"Some people are delaying meals, delaying showers, and particularly that connection back to the community."

Not optimistic about shortages: package provider

She welcomed the government's commitment to more home care packages.

"Unfortunately, we find ourselves where we providers are not able to respond because of the workforce shortages," Ms Drozd said.

AMCS has been turning away new clients since December because it cannot find personal carers to fill shifts.

The staff it does have are working extra hours and days to meet demand.

Ms Drozd has been working in multicultural community care for three decades.

"I have to say I have not experienced anything like we are currently experiencing," she said.

"At the moment, the organisation that I manage, we could employ at least 50 people full-time, and we would have enough work for them."

Like residential aged care, for two years, home care providers have been unable to access the usual flow of overseas staff because of border closures.

Ms Drozd said the industry had lost some staff because of vaccine mandates, and COVID-19 itself had seen workers furloughed.

But a Productivity Commission report identified the need for a significant increase to the aged care workforce 10 years ago.

"I'm afraid not enough has been done about it, even prior to the pandemic," Ms Drozd said.

She wants to see a clear plan from the federal government to address workforce shortages.

The government recently heeded calls from advocacy groups and unions to deploy the army to residential aged care.

Last year, the Royal Commission into Aged Care recommended an increase to award wages so the sector would attract more workers.

Instead, the government is waiting for a Fair Work Commission ruling on a potential minimum wage rise later this year.

"That takes planning, and that takes a pipeline of workers going forward, they need to be paid at the right level as well. So that'll attract people into this workforce," he said.

A year ago, the government announced more than $90 million to grow the home care workforce by training 18,000 new personal care workers and by establishing a Home Care Workforce Support Program to attract, train and retain personal care workers — as well as subsidising 33,800 places under the Job Trainer Fund for new and existing care workers to improve their qualifications.

"The Australian Government has announced $652.1 million to grow a skilled, professional and compassionate aged care workforce, as part of its aged care reform agenda," a statement from the Department of Health said.

The Department of Health said there were 15,000 more people employed in home care than at the start of November.

Recent floods have forced Val Timms out of her home, at least temporarily.

She wants to move back when the clean-up is done, and she's hoping she'll have enough home care support to do so.