This document has been prepared by Evaluate on behalf of Carers Australia. Evaluate is an independent private economic consulting practice, with a particular focus on social policy.

This paper describes the construction and outputs of a microsimulation model which looks at the economic impact of informal care on the lifetime income and retirement savings of Australian carers. It is therefore a model of opportunity cost from the carer perspective, and complements previous work undertaken for Carers Australia looking at alternative or replacement cost.

As context for the model, a comprehensive overview of the circumstances, rules and history of carer subsidies in Australia is provided, which also provides the basis for potential policy changes. In particular, it is noted that the historical rationale for carer payments was that they would substitute for care otherwise provided professionally in a nursing home (and at significantly lower cost).

Over time, this has been decoupled. Whereas at the introduction of the first carer benefit (the Domiciliary Nursing Care Benefit) it was equivalent to 33% of the Australian Government Extensive Nursing Home Benefit payable in respect of a person in an approved Nursing Home and receiving extensive care, by 1992 this had fallen to 7.9%, and is now only 6%. Similarly, whereas it was originally around 25% of the income of a couple on the basic age pension, it has now fallen to 10%. The problem for carers, and for the Government which relies on informal supply, is that: where the rewards for caring are reduced; the opportunity cost of care increases; and fewer prospective informal carers will be willing to meet demand.

The consequence of this is an increase in demand for substantially more expensive formal care, including residential care. This means that reducing the share of funding for informal care is a false saving.

The model simulates the full distribution of carer impacts in Australia, variously including observed distributions of:

At the mean, and at current subsidy settings, Australian carers will lose:

Some who are carers for extended periods of time will lose substantially more, with the most affected 10% losing at least $940,000 in lifetime income, and $444,500 in retirement savings.

Because demand for informal care is exogenous to the carer – it may be a random event, or influenced by decisions taken by the care recipient but not the carer – this financial burden is effectively randomly allocated. That it is expected to be borne by those to whom it is presented seems unjust, and inconsistent with broader public policy around welfare payments, particularly subsidies for formal aged care.

Two fiscal remedies are discussed to deal with this problem. The first is the introduction of the Superannuation Guarantee Contribution for the Carer Payment. While this would cost a little over $700 million in the first year, its impact would be to increase mean superannuation balances by $52,500, which would reduce age pension costs by up to $84,000. These savings to the Australian Government in future expenditure on the age pension are significantly higher than the cost of the proposed SGC payments per person, which on average over the lifetime of all carers would only be around $18,000.

The second option is to increase the Carer Allowance, by either:

The actual cost impost of these measures is highly dependent upon how a reduction in income foregone will act as an incentive to more people to care. This is described in terms of wage-elasticity of supply. If we assume a lower than observed elasticity of 0.66, then the nett cost of these measures would be $5.3 billion. However, if an observed lower-bound elasticity of 3.09 is used, then there are potential savings of $2.4 billion. This is because while there are large increases in direct government support for informal carers, the replacement of formal care demand provides savings at a much higher rate. 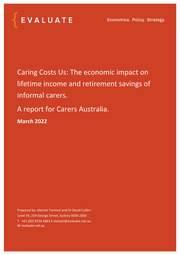