Formal documentation of a family agreement can assist an older person recovering their money when the arrangement ends involuntarily. However, people are cautioned to ensure the terms of the agreement are fair when they sign.

At 71 years of age, Pamela was encouraged by her son, Leo, to sell her house and come and live with him and his wife. Pamela was happy to do so, and she used the proceeds from the sale of her home to contribute $350,000 to the purchase of a new property. This contribution included funding renovations for a self-contained unit on the property.

The property was bought in the name of Pamela’s son and daughter-in-law and a family agreement was formalized at the time, showing Pamela’s contribution for the granny flat “where Pamela may live, rent-free for life.” The agreement noted that if the agreement ended due to involuntary circumstances, Pamela “will receive her contribution less an agreed amount upon the sale of the family home”.

Six years later, Pamela’s son and daughter-in-law separated, and needed to sell the property and divide the proceeds. The property had almost doubled in value in that time.

Pamela contacted SRV for assistance to understand whether she was entitled to the return of her $350,000 contribution or an amount proportional to her contribution (approximately 50%), and whether she stood to gain from the property’s appreciation, despite the clause on what would happen if the arrangement ended involuntarily.

Through Justice Connect, SRV was able to refer Pamela to a pro bono barrister who advised on the agreement. The barrister confirmed that Pamela should receive the return of her $350,000 but not a proportional amount. He advised that the conversations between Pamela and her son indicated that as he and his wife would be dividing assets he would not be in a position to pay a higher contribution in proportion to the sale of the property, and the agreement recognized this.

The formal documentation of Pamela’s contribution enabled her to recover her money when the arrangement ended, however, it also allowed the unfavourable terms where she did not benefit from the appreciation of the property. 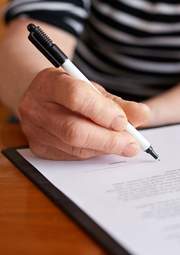