The reported prevalence of mental illness in rural and remote Australia appears similar to that of major cities. However, access to mental health services is substantially more limited than in major cities. Tragically, rates of self-harm and suicide increase with remoteness.

People in rural and remote areas face a range of stressors unique to living outside major cities. These include a greater prevalence of some chronic conditions and disability, and generally poorer health. Rates of smoking, risky drinking and illicit drug use are also higher. There are fewer employment opportunities leading to lower incomes and less financial security. There is also greater exposure and vulnerability to natural disasters, while rates of overcrowding, housing stress and homelessness are higher as well. 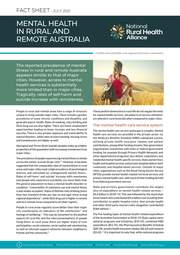