The findings are based on a survey of a representative sample of 7,000 community dwelling people aged 65 and over (the Survey of Older People (SOP)). These findings provide estimates of how many people aged 65 and over have experienced elder abuse in the past 12 months. They also assess the most common forms of abuse, the characteristics of those who are most likely to experience abuse, who commits abuse and what people do when they experience abuse. Further areas of focus in the SOP include whether older Australians have wills, whether they have executed powers of attorney and whether they are involved in family agreements colloquially known as ‘granny flat’ arrangements.

It is important to note that the SOP focused on people who live in the community and did not cover people who live in aged care or could not participate in the survey due to cognitive decline. The Royal Commission into Aged Care Quality and Safety has recently estimated that the prevalence of physical abuse, emotional abuse and neglect in aged care settings is 39.2%. 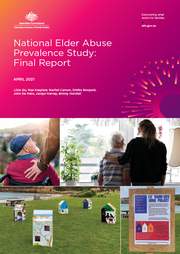