We live in a society where youth is revered and old age feared. Every ad for an anti-ageing product says ‘old is ugly’; every forgetful old-timer joke feeds a cruel dementia stereotype; every ‘grey tsunami’ headline suggests living longer, healthier lives is a natural disaster that will destroy everything.

Implicitly and explicitly, we’ve been fed the myth that young is better than old, since the day we were born. So, it’s hardly surprising most of us say and do things that are a bit ageist from time to time - often without knowing it. And older people can be the most ageist of all. Hardly surprising, but not right.

Ageism has been called our last acceptable form of discrimination and it’s far more widespread than most of us realise. Ageism is a huge problem for Australia, as it affects the confidence, quality of life, job prospects, health and self-esteem of millions. And it denies our society the many economic and social benefits that flow from the full participation of everyone. As you’ll see as you read on, growing older in Australia today is pretty good for many of us, but it could easily be better or even great for most of us – if we can just end ageism. But how? 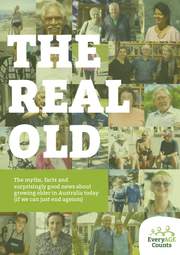