Elder abuse is a significant issue in our community that has attracted national and local attention, and growing momentum for action. It is a complex social, health and human rights issue experienced and carried out by Western Australians of all backgrounds. The Western Australian Government defines elder abuse as ‘… a single or repeated act, or lack of appropriate action, that occurs in a relationship with an older person where there is an expectation of trust and where that action causes harm or distress to the older person’ (WHO, 2008).

The combined efforts of researchers and governments continue to build the evidence base on the prevalence and scope of elder abuse. The available studies have generated a broad, and widely accepted, understanding of its characteristics, contributing factors and effects. This understanding is the foundation of current responses. Elder abuse is a human rights issue that violates an older person’s rights to security, safety, care, wellbeing, independence, dignity and respect. 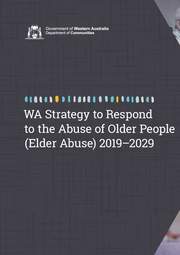