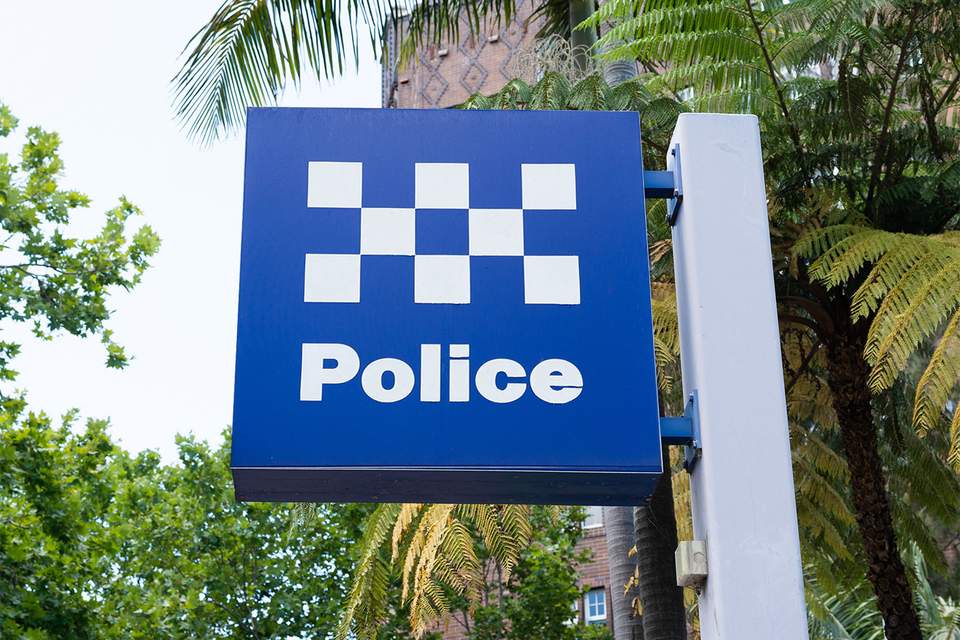 What is Australia’s largest police force doing about Elder Abuse?

As part of the NSW Government’s Ageing Strategy, the NSW Police Force recruited and trained twelve Aged Crime Prevention Officers (ACPOs).  Their responsibility is to prevent and respond to the exploitation, abuse and neglect of vulnerable people, focusing on older people, people with disability and the homeless.

Abuse of older people and people with disability is unacceptable. Together we can prevent it. 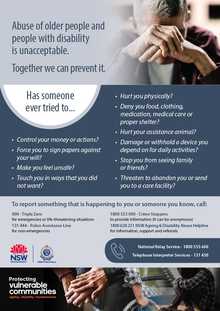 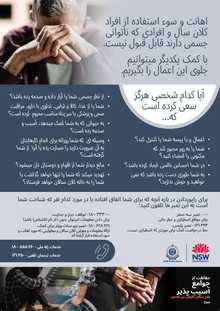 This factsheet has information about what ACPOs do and where your nearest ACPO is located. 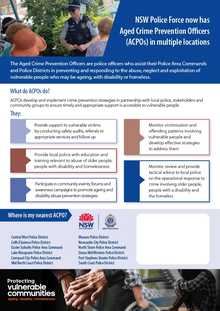 How do you contact the Aged Crime Prevention Officers?

It is important that when you first experience or recognise a crime, you contact your local police.  If you’re unable to attend in person, you should telephone the station or contact Crimestoppers.  Once you’ve made that initial contact, referrals may be made to ACPOs to provide additional support.

The ACPOs are specialist officers who are part of the Crime Prevention Unit.  This means their availability is subject to their other responsibilities and the operations of the police station where they’re based.  You can find details of the districts where they are based on the factsheet.

Compass spoke to Assistant NSW Police Commissioner, Tony Cooke who said, “All forms of crime are being targeted.  People can be subject to scams and frauds such as fake tradies.  Many cases of aged-related crime involve fraud, online scamming, neglect, assault, and domestic abuse (both physical and emotional).”

Mr Cooke had a high profile as the commander in Sydney’s Southwest during the COVID-19 pandemic.  In that job he cultivated communication with 67 multicultural communities.  His new role is dealing with what NSW Police Commissioner, Karen Webb, calls “silent crimes.”

He says, “It is difficult to determine the level of under-reporting.  However, I acknowledge some of this behaviour is deeply interpersonal, within families and involving victims who might have difficulty communicating or interacting with services.”  He thinks the best approach is to raise awareness and share information with the public about how police can assist.  “They should be confident the police will do all they can to support them,” he says.

The training given to the ACPOs covered topics like Introduction to Elder Abuse, Disability, Capacity, Powers of Attorney, Enduring Powers of Attorney and Enduring Guardianship.  (You can find information on all these topics on the Compass website.)

The officers provide local police with information on how to monitor and recognise victimisation and patterns of offence.  They also raise awareness in the community by taking part in community events and awareness campaigns relevant to abuse of older people. ACPOs work collaboratively with the Multicultural Liaison Officers.

Specialised training was last delivered to the current ACPOs in May 2022 and the NSW Police Force is looking at rolling out the program to every officer in the state.

Assistant Commissioner Cooke is cautious about giving a timeframe for this rollout but says it’s a priority.  “It’s about equipping police to recognise the signs of elder abuse.  One of the issues we find is that elder abuse at times can be difficult to see. Enduring Powers of Attorney can be misused by people.  Wills can be mis-drafted. How do we recognise the signs if someone presents to the police?”

Mr Cooke acknowledges that it is hard to fully appreciate how successful the Aged Crime Prevention Officers have been so far.  “The role is relatively new; it is difficult to gauge the demand. What is important is the police are in the community, raising awareness and providing support to those at risk of abuse.”

Mr Cooke told Compass that he is seeking an external evaluation on “the level of need, the work that we’re doing and the results that we’re getting and how we can best support the community.”

A future step under consideration is for short, sharp, intensive training which is routinely delivered in six-minute briefings every morning and at every change of shift to the broader policing community.  Mr Cooke says that this is “so that police on the front side of the truck, who are the first touch point, and the most important touch point, for any offence, start to recognise particular signs that might take a particular nuanced response, which might be around aging or disability.  Because things aren’t always obvious and experience is a bonus.”

NSW Police have produced an eight-page factsheet on ageing and disability abuse.  It is designed to raise awareness about abusive behaviours and reporting avenues.  The factsheet includes 20 examples of abuse which can range from forcing someone to sign documents, controlling money, denying medical care to physical and sexual abuse.

NSW Police: Abuse of older people and people with disability

This factsheet produced by NSW Police outlines information on abuse scenarios along with key helplines. 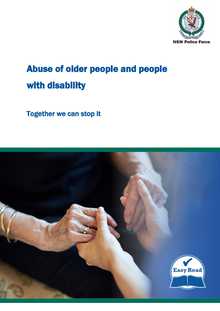