Making a Will: Resources for Aboriginal and Torres Strait Islander people

We as Aboriginal people need to think seriously about penning Wills. Not leaving a clear and concise map of how assets need to be distributed and who is the lead responsible person, the executor of the estate can create anger, angst and concern and dysfunctionality in relationships and family breakdowns.” Phil Duncan, Gomeroi Elder

A Will is a document that appoints an executor/s to manage a person’s affairs after their death. If someone passes away without a Will, the law decides who will get their assets and other people can make decisions about their funeral and burial, which may not be in line with their wishes.

Making a Will is important for Aboriginal and Torres Strait Islander people to:

Tender Funerals Australia has worked with community members to develop these short videos for Aboriginal and Torres Strait Islander people and service providers about making a Will. The videos feature:

One video is intended for Aboriginal and Torres Strait Islander people and the other is for service providers.

Our thanks to Michael O’Donnell, Bobbi Murray, Phil Duncan, Professor Prue Vines, the Ecstra Foundation and the AMP Foundation.

More information and next steps

I encourage all Aboriginal and Torres Strait Islander people to make a Will. It doesn’t matter how old you are. It’s about passing on things that are important no matter what happens.”

There are a number of ways to make a Will. Some people choose to make their own Will using an online Will kit. If using an online kit, the Federal Government Moneysmart website suggests having the Will checked by a lawyer or the Public Trustee and notes that a Public Trustee can also write a Will, which may be free for people in certain circumstances.

The NSW Trustee & Guardian also has information about some things to be aware of if using a do-it-yourself Will kit and provides a free Will-making service for people on the full Age Pension or equivalent. People in other states and territories should refer to their local Public Trustee office – there is a list here.

The Law Society of NSW suggests engaging a lawyer to draft a Will and has an online Find a lawyer service. People in other states and territories should refer to their local law society for information about finding a lawyer in their area. 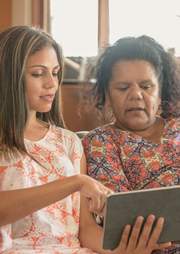